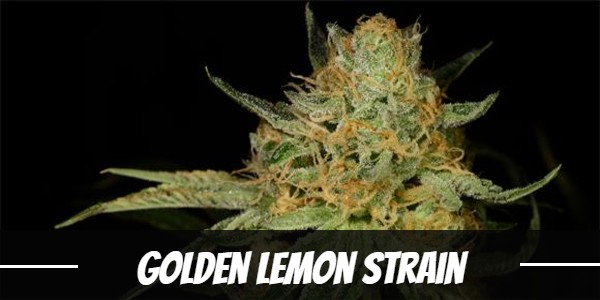 There’s a lot to love about fruity weed strains, but sometimes they’re missing a bit of bite. That’s not the case with Golden Lemon weed. This strain is an herbal, sharply citrus strain that’s got the kick you’re looking for. The 60/40 Indica-dominant genetics give it a buzzy, bright head high that’s evenly matched with a heavy, comfortable body buzz. The 23% THC content will give even long-time users the boost they’re looking for.

The Golden Lemon weed strain was created by DNA Genetics. The strain is the result of an Amsterdam-intense cross of Kosher Kush and Lemon Skunk, which are the root of its intense scent profile. The effects lead to a long-lasting, euphoric high that’s not too energetic, offering a well-balanced experience for all sorts of users.

Golden Lemon won’t make you wait. Within the first few puffs, a sense of euphoria will build between your eyes and then spread through the rest of your body. It’s an uplifting, relaxed, and creative experience. The sativa heritage leads to just enough energy to keep you aware of the world around you, making it ideal for pairing with watching movies or doing small crafts.

The body buzz Golden Lemon weed offers is a perfect complement to the head high. It’s a heavy, relaxing buzz that melts throughout the body over time. The grounding sensation keeps the heady buzz from carrying you away. However, it’s not overly sedating in moderate doses. It’s a great choice for afternoon, evening, or weekend use, when nodding off after the buzz winds down won’t cause any problems.

The body buzz and uplifting head high give Golden Lemon a few side benefits. Many reports about Golden Lemon strain info mention that stress and depression seem to melt away with this strain. People who live with chronic pain and inflammation may also notice a reduction in their symptoms. Best of all, insomniacs can rely on Golden Lemon to ease them off to sleep in the right amounts.

Looking to buy seeds like Golden Lemon? Check out our marijuana seed bank.

Golden Lemon starts off with a fresh, pungent herbal scent that’s quickly dominated by a citrusy lemon undertone. As nugs are burned, they develop a woody, piney note as well.

Golden Lemon weed’s taste is where the name makes the most sense. The sweet, herbal flavor includes a significant lemon flavor. The exhale is dank, with the Skunk ancestry coming through clearly.

If you’re looking for a strain that can stir up a happy mood and is a strong tranquilizer at the same time, Blueberry is your best choice with its powerful Indica vibe.

Golden Lemon is a serious strain that’s great for experienced cannabis connoisseurs. That means that newer users may find it a little overwhelming if they don’t pace themselves. People with lower tolerance often find that it doesn’t take much of this high-powered strain to get the experience they want. Luckily, overindulging in Golden Lemon is most likely to lead to little more than a mild headache and an unintended nap.

Other than that, most people report nothing more than the occasional dry eyes and cottonmouth when using Golden Lemon. Keeping a glass of water or some eyedrops nearby if you’re prone to these reactions is enough to relieve the problem.

Download my free Grow Bible and grow your own Golden Lemon!

The Golden Lemon weed strain is a grower’s dream. Like many hybrid strains, it’s an easy and forgiving grow. The plants get quite large, though, so it’s essential to make sure you have enough space before you get started.

Even though the Golden Lemon strain is technically indica-dominant, it follows its sativa heritage in the growing process. Plants can reach six feet tall inside, and up to 8 feet or more outside. They grow quickly, too. If you can, it’s best to grow this strain outdoors, just to make your life a little easier and to avoid adjusting your lights every day.

As with many cannabis strains that grow like sativas, it’s important to make sure your plants have enough nutrients. They grow quickly, so they use nutrients more quickly. Giving your plants the nutrients that they need will ensure you achieve Golden Lemon’s world-famous harvest.

Golden Lemon is forgiving to all types of training. If you’re looking for the quickest harvest possible, though, low-stress training works best. This allows the plant to put its energy into new growth instead of repairing cuts. Give your plants the light they need, and you’ll see huge harvests.

Looking to buy seeds like Golden Lemon? Check out our marijuana seed bank.

Indoor grows can sometimes be a little snug for Golden Lemon, but it can be done. Expect a harvest in eight to nine weeks, with yields up to 20 ounces per square yard indoors.

For growers in the northern hemisphere, the harvest is typically ready in late September or early October. Expect harvests of up to 28 ounces per plant outside as long as humidity and temperature remain relatively stable.

What is the Golden Lemon strain yield?

How much THC does Golden Lemon have?

What are the origins of the Golden Lemon strain?

Golden Lemon was created from a mix between Kosher Kush and Lemon Skunk.

Have you ever smoked or grown your own Golden Lemon? Please let me know what you think about this marijuana strain in the comments below. 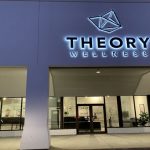 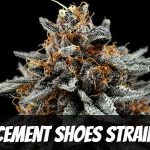