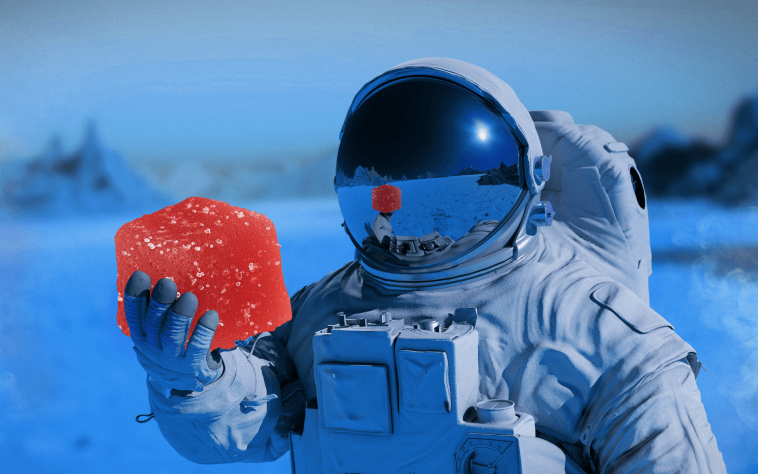 Here’s how it feels to travel to a new cannabis galaxy.

If you’re a space cadet in a state still under cannabis prohibition, it can be hard to get your hands on the euphoric and often healing effects of THC, its main psychoactive ingredient. But companies like MOONWLKR are entering a new frontier: Delta-8 THC.

What you probably think of when you hear “THC” is really delta-9 THC, a prevalent cannabinoid in cannabis. There are only trace amounts of it, if any, in hemp, the source of most over-the-counter or mail-order CBD. But with a little lab work, CBD can synthesize into delta-8, which is close enough to delta-9 to give you a similar liftoff. Many people describe the delta-8 THC experience as an in-between point between THC and CBD: Psychoactive, but gentler and more clear-headed, with fewer side effects like paranoia and anxiety. Because it’s derived from hemp, it shares the same legal status as CBD at the federal level, so it can warp to doorsteps in most states.

As its popularity spreads, companies are in a space race to get delta-8 on shelves, but not all delta-8 is alike. Delta-8 comes from CBD isolate, but isolates take away some of that cannabis magic. MOONWLKR creates some extra adventure with terpenes—botanical compounds that give different cannabis strains unique flavors, smells, and even effects—inspired by some favorite strains. Between gummies and vape carts, there are eight strains to choose from.

MOONWLKR also tests each batch of product for potency and purity, available by scanning a QR code on the back of each package. This provides a measure of trust & information that’s especially crucial as more products come on the market, so that you can be sure quality and consistency aren’t getting lost in the craze.

Almost ready to blast off into delta-8, but curious about what it actually feels like? We had a writer try out the MOONWLKR lineup and report back.

Each MOONWLKR gummy has 25 milligrams of delta-8 THC. Standard delta-9 edibles in Washington State, home of Leafly’s HQ, are 10 milligrams. I may have launched a little early and taken a whole 25 milligram Blue Dream gummy without looking at the bottle—so my first moonwalking experience was kind of a mission to Mars. Like a delta-9 edible, the body high came on strong. It was followed by an insatiable need for snacks: As CBD vlogger McKenzie Rae put it, “I keep scrolling through UberEats like it’s social media.” If you’re normally sensitive to THC edibles, you might want to start with half or even a quarter. (MOONWLKR recommends this, too.)

The gummy was more intense than I expected, but I was still somewhat lucid: I have a tendency toward anxiety while using edibles, and while the onset got a little rocky, my rational brain was still much more engaged with delta-8.

I wouldn’t necessarily call it a muted version of regular THC. Parts of the delta-8 high were just as strong. But it also felt lighter in some ways. The euphoria was definitely there, but the effects were shorter. Given the choice of working or studying with delta-9 or delta-8, I would definitely choose the latter—although I’m not exactly ready to do any advanced trigonometry under the influence of either. I’m not ordinarily someone who uses THC as a study aid, though, so your space mileage may vary.

The rest of the gummies were just as potent, and the Mango Kush was especially effective at getting me to sleep. They were also extremely tasty, and it was hard not to eat more and get sucked into a snack-attack orbit.

If you’re comfortable with vape cartridges, that might be a better way to tiptoe into the delta-8 world—they kicked in faster so it was easier to get a sense of tolerance. They’re smooth and honestly about as delicious as the gummies without feeling like they’re masking anything. The Strawberry Gelato vape, aka Calypso, was a particular treat. If you prefer an earthier flavor, the Orange Chemdawg in the Telesto vape delivered, but with a side of bright citrus. Telesto also, in our experience, provided the clearest high: After sampling all the cartridges, I chose this one to hit before taking on a new cooking challenge. I nailed it.

Titan, with Super Lemon Haze, was still somewhat energizing, but a little foggier. Himalia, packed with a very flavorful Grape Runtz, and Calypso provided a little more relaxation, and made for a very classic, fun time watching cartoons. While a little more nebulous, they didn’t knock me out.

As with the edibles, the delta-8 high was similar to delta-9, but a little shifted. It was a little easier to get things done, but the head high was still very much there, even if it was a little less foggy. Of course, both delta-9 and delta-8 affect everybody differently, so maybe try a little shuttle test launch before aiming for the stars.

MOONWLKR is offering free sample packs to give you everything you need for your first delta-8 orbit. Visit MOONWLKR.com to claim yours.

We tried delta-8 THC with MOONWLKR originally appeared on Leafly.com 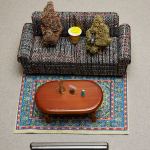 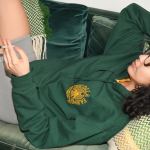