Slap & Tickle, Granola Funk, Cat Piss, these are three strains that have at least one thing in common; their names garner visceral reactions, and that’s kind of the point. On the one hand, weed that “slaps and tickles” might make for an experience not unlike smoking your typical indica-dominant hybrid. On the other hand, cat piss is such an aggressive smell that’s so hard to get rid of that it’s almost unfathomable that anyone would want to smoke it. But as the weed adage goes, don’t trust a strain by its name.

As weed comes into the mainstream, breeders are coming out of the shadows and finding ways to express their unique perspective, stand out, and capture the attention of a variety of smokers. Enter strain names. They’re a breeder’s choice, and are often drawn from attributes like taste, smell, lineage, effects, and color, but can also be based on more hazy things like a random memory the breeder had or something they experienced while smoking.

Naming is a form of branding and self-expression for breeders, and they should retain that creativity and agency; however, novel names can be off-putting, which means people miss out on new experiences and effects they might otherwise benefit from.

Unique strains and the people who name them

Classic strain names like Sour Diesel and Blue Dream tell you what you can expect, and they’ll always be available. Still, these days, breeders are experimenting and perfecting new crosses, many of which might sound like things you’d want to steer clear of, yet the flavors and effects might surprise you. With this in mind, we chatted with four different cultivators about what funny-named strains they’re breeding and why you should try them.

Parks McMillan, Director of Cultivation at Seed & Smith, doesn’t play it safe when it comes to betting on strains. Seed & Smith’s strain catalog has depth and range because Parks makes sure to cater to connoisseurs, with unique strains, and newer smokers, with strains that have fruitier, sweeter profiles.

The lead Cultivator of Veritas Fine Cannabis, Shane Reynolds, uses his years of experience growing cannabis to acquire quality genetics and uses them to cultivate a number of strains on this list, many of which have names that pack as much punch as the flower itself.

Kenny Powers, aka Powerzzzup, has cultivated strains for a brand that is as close to a household name as you can get in the cannabis space: Cookies. Not only are his strains rapper approved, but they draw long lines of smokers to Cookies dispensaries. The Cookies Fam regularly garners crowds akin to that of a Jordan release day, before there was a SNKRS app.

Here are eight strains with off-putting names as recommended by the breeders and growers cultivating them.

We’d be remiss if we didn’t start with GMO, a strain that paved the way for a few of the strains on this list. A cross of GSC and Chemdog, GMO has a pungent, funky smell, similar to that of garlic. You might not come for the flavor, but you should stay for the effects which make the garlicky bite worth enduring. It can clear the mind and melt the body, making way for a calm focus without the intensity you might expect from a high THC strain.

After you’ve tried GMO and are ready to hit the old dusty trail, grab Garlic Road, a phenotype of GMO with a name that’s a bit more on the nose. Garlic Road, a cross of GMO and I-95, named after a highway in Colorado, has a sweet aroma and GMO-like effects that lean more uplifting. GMO leaves most people relaxed yet focused, and Garlic Road tends to do the same — but with an added smile and pep in your step.

Yuk Mouth won’t ruin your teeth, but it might give you cottonmouth, so you may want to grab some mints before lighting up. This GMO and Dosidos cross has an aggressive nose, and if that’s not your thing, maybe the cerebral euphoria and full-body relaxation are.

Described by Reynolds as an “old school creeper,” Yuk Mouth’s effects might be latent, but when they hit, you’ll be forced into a horizontal position, wondering where the nearest drink is.

Let’s address the unicorn in the room. No, this strain doesn’t smell like poop. Unicorn Poop gives off citrusy, diesel notes thanks to its parents, GMO and Sophisticated Lady. As for the name, it’s a nod to the color and shine of the nugs. Unicorn Poop is a beauty, with a very distinct layer of trichomes that makes it shine.

If you’re still on the fence, please your inner child who probably would have loved to spend a few hours with a unicorn, and while that’s not what’s happening here, the giggly, euphoric effects are a close second.

While the name “Fly” comes from its parents, Florida Kush and The Y, it could also have been foreshadowing how the strain would enter the market: with a lot of buzz and difficult to catch. This Cookies strain, bred by Powerzzzup, hits the body hard, and prepares the mind for takeoff with it’s cerebral effects. The flavor is sweet with gassy notes — a bit more palatable than the name might imply.

Come for the pie, stay for the tropical vibes. A cross of Tropicana, Grape Pie, and Papaya, Poon Tang Pie is for flavor chasers. With notes of berry, citrus, and pine, this strain will leave your mouth watering, mood boosted, and ease you into a euphoria that gently washes over the body. The name, believed to be a nod to the comedy film Pootie Tang, references the papaya and grape pie lineage that give the strain its sweet, fruity flavors.

Who knew weed could taste like a hamburger? We owe a collective thank you to the genius who smoked and thought, “weed should taste like meat.” MeatBreath, a cross of Meatloaf and Mendo Breath, is relaxing yet cerebrally stimulating. It starts behind the eyes but follows up with a jolt of energy, making it perfect for evening creativity or focus time, before easing your eyes closed for the night. This strain is said to be named both as a result of lineage and homage, most notably Lamb’s Breath which had a breakout moment over a decade ago.

Not off-putting so much as simply unusual. Smoke like multi-hyphenate rapper/businessman Berner, and try Gary Payton. Cookies fam breeder Kenny Powers’ story of choosing the name “Gary Payton” gives us a glimpse into the cultivation process. What is now known as Gary Payton was formerly “strain number 20” of many phenotypes he was testing. Strain number 20 stood out, and it just so happened to be Gary Payton’s old number.

This collaboration is the real deal, folks. Cookies worked with Gary Payton to license and bring this strain to the market. If you’re familiar with Gary Payton’s revered NBA career, then you might expect this strain to feel like a full-court press, but it’s quite balanced. Gary Payton delivers relaxed energy that eases body pain while providing mental clarity. It’s no surprise that Berner contacts Powers for this strain before his studio sessions.

The 8 best strains with off-putting names, according to weed cultivators and breeders originally appeared on Weedmaps.com 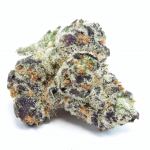