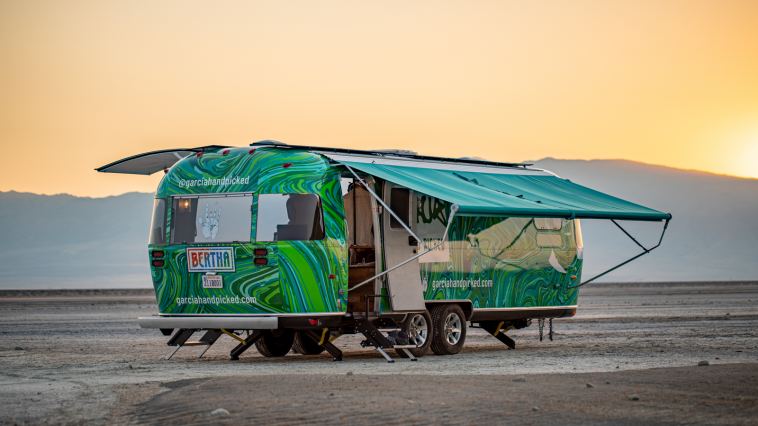 The weed that Shakedown Street deserves is finally here — and it’s anything but shake. Rejoice, Deadheads: The official Jerry Garcia cannabis brand, Garcia Hand Picked, is now available on dispensary shelves throughout California, and will soon be offered in other legal states too.

Created by the Garcia family in partnership with Holistic Industries, a multi-state cannabis operator active in nine states plus Washington DC, Garcia Hand Picked made its debut this November, just after the 25-year anniversary of the iconic frontman’s passing. But if you ask Trixie Garcia, one of Jerry’s four daughters, about the conception of a Captain Trips cannabis brand, it’s been a long time coming.

“We’ve considered the idea as early as the year 2000,” Trixie told Weedmaps during an hour-long phone interview. “But we’ve really been thinking about the brand for eight years in earnest. Ultimately, getting into the cannabis space wasn’t a green rush thing for me… I wanted to wait until we found the right partner who was into the nuances of the culture.”

That partner is Josh Genderson, CEO and founder of Holistic Industries, as well as a tie-dyed-in-the-wool, “lifelong” Deadhead. (His favorite live shows? Europe ’72, Capitol Theater Port Chester ’71, and Winterland ’77, among others.) Mirroring Trixie’s concerns about finding the right collaborator, Genderson explained to Weedmaps that his company has “said no so many times to celebrities and established West Coast brands” about launching a weed product with a famous face. “It’s never made sense for us, and we’ve always been able to create our own brands that are successful. But a Garcia brand? It’s a ‘pinch me’ sort of moment.”

“There’s a Mount Rushmore of cannabis,” Genderson continued during a call. “Bob Marley. Snoop Dogg. Willie Nelson. They all belong to it and have some iteration of a brand. And who was missing in that last spot? Jerry Garcia.”

After Holistic worked with Trixie and the Garcia family to make sure “every step of the process was lock-step, intentional, and a true expression of Jerry’s family and legacy,” Garcia Hand Picked premiered with a suite of specialty flower strains, pre-rolls, and edibles, including “Jerry’s Picks,” gummies with 5 milligrams of THC that are shaped like guitar picks.

The strains include “premium, slow-cured” varieties like Peanut Butter Souffle, SFV OG, and Fire OG, as well as the “heirloom” Chemdog, which is “believed to have hailed straight from a 1991 Grateful Dead parking lot in Deer Creek, Indiana.” In the future, Garcia Hand Picked hopes to release other legacy genetics that tie into the history of Deadhead and Lot culture. “It’s all about trying to make the whole world like a Grateful Dead concert,” Trixie explained with a laugh.

To learn more about the development of this landmark cannabis line, Weedmaps spoke to Trixie Garcia shortly after she finished some gardening at her home in Sebastopol, California. On top of detailing the first time she smoked weed at age eight, Trixie, who’s now 46, discussed what makes their tentpole strains so special, why Holistic was the right partner-in-pot, and she even speculated what Jerry’s own favorite live show might have been.

This interview has been edited for length and clarity.

Weedmaps: Can you tell me about your own personal history with cannabis, as well as your preferred consumption method today?

Trixie Garcia: My preferred consumption method today — and probably for the past ten years of being a daily consumer — is still a bong. It’s simple and to the point.

I was raised with weed as a normalized thing in our household and our culture — Grateful Dead and Merry Prankster culture. It was totally normalized, like a glass of brandy of whatever. In our family, joint rolling was a skill set like slicing the turkey.

Cannabis has always been a friend, an ally. I’m a believer in it. I believe that what we’re doing is for the benefit of humanity, giving people better options for medication, entertainment and more. There’s a thousand reasons why launching a cannabis company feels natural to me. And I’m not a musician! This is another way for me to participate in our scene.

WM: Do you remember the first time you smoked, and what the context was?

Garcia: There’s the PC answer, and the not-so-PC answer to the question. The truth is the truth, though: I was 8-years-old and some hippie handed me and my best friend a joint outside of a Dead show. He was like, “Hey girls, you wanna get high?” And we were both like, “Yeah!” [laughs] It was a good time! That’s the most consistent thing I can say: weed brings a sense of being in the moment. Suddenly, everything (including your perspective) is a little lighter, everything is a little funnier, everything tastes a little better. It’s nothing but a good time.

Garcia: I microdose psilocybin pretty regularly. As far as cannabis goes, I’m a macrodoser for sure. I won’t really feel it until I have at least 30 milligrams of THC in me.

WM: When did you first seriously consider starting a Garcia weed brand?

Garcia: We’ve been thinking about the brand for eight years in earnest, really doing research, talking to people, touring facilities, watching other “celebrity” brands have so-so launches. Getting into the cannabis space is not a green rush thing for me. There are plenty of investment bankers out there already to make that happen…

I really wanted to find a partner who was into the nuances of the culture, including a dedication to thoughtful cultivation and the farmers themselves. Holistic Industries has a lot of integrity. They’ve gone above and beyond, and we have a lot of high hopes for the future.

What Jerry means to people is a huge responsibility, and we wouldn’t want to hand that over to the wrong type of organization. I don’t want to take advantage of the good faith that my dad’s skill and talent built. That’s not what this is about. This is to empower anyone who chooses cannabis. To normalize it. To kill the stereotypes. We can come together under this, and share what the fanbase has in common. What we’ve been doing for the past 50 years is growing great weed, you know?

WM: Can you tell me about determining Garcia Hand Picked’s initial product offerings? In particular, I’m curious about the legacy behind some of the strains you’re releasing.

Garcia: So on the road with the Grateful Dead, and the ’60s counterculture, there were some famous exchanges of genetics that happened. That’s the story of the Chemdog, in particular. The idea is to bring back these rare genetics, and we’re working towards it. That’s part of my vision. I want to be able to have something from those eras that you can count on, but the reality is that it’s a really liquid situation with agriculture. Still, there’s a great story behind pretty much every strain. Some are new strains, like our indica, the Peanut Butter Souffle. It isn’t an heirloom strain in the same way as the Chemdog… but it’s delicious!

WM: Which strain excites you the most from the initial offering?

Garcia: I’m most vibing off the sativa pre-roll Green Lantern strain. It’s a sungrown strain from Mendocino County. It’s super rootsy and a good, well-rounded, high-energy bud. It keeps well, it’s flavorful. We’re going to try and have a long-term partnership with this particular grower, and this is his proprietary strain.

We also definitely want to do some concentrate partnerships in the future, in order to showcase some of our strains. We want to do some limited edition runs, and things like that.

WM: What types of consumers do you think will gravitate towards the brand at first? The Dead obviously appeal to multiple demographics and age groups, but who will be first in line to get GHP?

Garcia: Probably the fans! They’ll be interested to try it, and it’s very important to me that they don’t feel disappointed or ripped off in any way whatsoever. We’re not out to get anybody; we’re just trying to grow some good weed. It’ll be impactful for the fans. We want to make it special and respectful, and the packaging is really beautiful. I’m holding some in my hand as I talk to you. I’m very proud of it. It’s been a lot of hard work.

I like this weird kind of quiet brand launch. There’s not a lot of trumpet blowing or parties. It’s very underground and in-the-know, in a way. Which is just like how the Grateful Dead was.

WM: Can we talk about the aesthetics of the brand? How did you zero in on what ended up becoming the face and image of GHP?

Garcia: There was a lot of talk and a lot of pictures we looked at. We had ideas like, “Do we use a photo of young Jerry for the sativa, and old Jerry for the indica?” Silly things like that [laughs].

The image of Jerry on the packaging is from a photo taken of him in Egypt. It’s one of my favorites, so I voted heavily for it. And we wanted something swirly and organic for the rest of the design. It looks like smoke. I went to art school, so I had some fun working with Holistic and adding my eye.

WM: So outside the actual cannabis, which aspect of GHP excites you the most?

Garcia: Oh man. I’m really excited for getting out there, and getting involved in the farmer’s lives. And telling their stories, as well as stories about life on the farm. The sungrown farmers? That’s a real portal into some deep, rootsy hippie stuff. Eventually, we’ll showcase the growers on our website.

WM: In the spirit of “hand picks” — since every Deadhead’s favorite game is to name their favorite show, do you ever recall Jerry mentioning a show he particularly liked? A “favorite” tour of his own?

Garcia: Oh man! That’s funny and a really good question, a rare question. I bet there is one. I have to wonder if it was a show he felt was perfectly played, or a show that was super ridiculous and all hell broke loose. Which one would he prefer? The one where they almost got struck by lightning at the pyramids? Maybe, it was just a quiet night at The Warfield, where he just felt like he was really in the zone. I could imagine that, too.

WM: What about you? Do you have a favorite live show or touring year?

Garcia: I was born in ’74 so the mid-to-late ’80s was my heyday, you know? Another good question… probably the New Year’s Eve shows. Those were always really special. One of those, probably. But none in particular because it all blends together… just like the songs!

WM: How do you hope Garcia Hand Picked will grow from here?

Garcia: I’m not into growth above all else. I want to create a cool scene that a lot of people feel good being a part of. It basically already exists, but it needs fertilizer and investment. The whole movement is a beautiful thing and I’ve witnessed it my whole life. Why not share it and try to propagate it? Recreate it at different levels, and invite in new people to have that experience. The music changed so many people’s lives, and cannabis can do that, too. Garcia Hand Picked is ultimately about trying to make the whole world like a Grateful Dead concert [laughs].

On Jerry Garcia’s legacy and weed brand, a conversation with Trixie Garcia originally appeared on Weedmaps.com 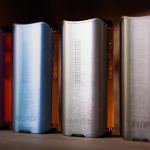