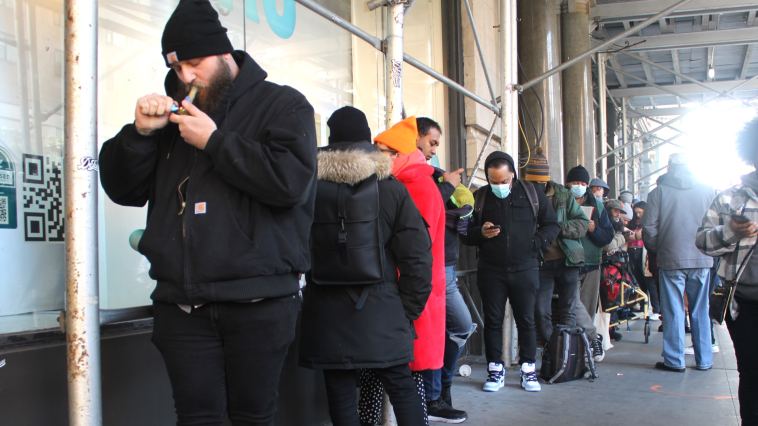 At 4:20 p.m., Housing Works’ new retail dispensary at 750 Broadway, one block west of Astor Place in Greenwich Village, welcomed its first official customers for legal weed sales. Shoppers waited in line outside of the dispensary ahead of the grand opening. Housing Works is one of eight nonprofits that got approval to open doors on day one. The nonprofit was the only licensed store ready to welcome customers on New York’s official opening day.

Not long after the first purchaser of legal weed, Ken W., made the historic transaction, the floodgates were open for New Yorkers 21 years of age and older to legally purchase cannabis. Sales continued until about 7:45 p.m.

35 other retailers are also licensed to kick off New York’s legal weed market. But most of them are limited to delivery while the state helps them build out brick-and-mortar shops. Other nonprofits could join Housing Works soon. Here’s how and where to buy legal weed in New York on day one, and beyond.

Keep reading to learn how the first day of legal weed in New York unfolded.

Just before doors opened, Leafly spoke to the owners and organizers of Housing Works, along with regulators, and faithful customers who started lining up hours in advance.

The Housing Works new store, which used to be a Gap retail store, was soon filled with cameras and microphones.

While not there in person, Gov. Kathy Hochul tweeted, “This is a historic milestone for New York’s budding cannabis industry, and I look forward to solidifying our state as a national model for building an industry that’s equitable and inclusive.”

OCM Executive Director Chris Alexander was nearly brought to tears, thanking his team profusely. “I am honored, humbled, appreciative of the adults in this room. I see you all; we’ve been doing this for a long time. There have been a lot of rooms [that] listened to me talk. But I just appreciate your commitment, your unwavering, unwavering push for equity. I say often [and] I will say it again, equity is not a thing, it’s the thing.”

Given how much they worked to bring the adult-use market online, it’s only fair that regulators like OCM’s Executive Director Chris Alexander and Tremaine Wright, chair of the New York Cannabis Control Board, got first dibs on legal sales. They both picked up some edibles in the ceremonial purchase, and Alexander grabbed an eighth (he said he’ll roll up with papers).

The products on the shelves

While they were only open for a few hours on opening day, the Housing Works site says they will be open 11 a.m. to 7 p.m. daily. CEO Charles King announced the dispensary would initially carry products from six brands, including Aryloom, Back Home Cannabis Company, Florist Farms, and Lobo.

Prices are fairly standard for flower products, with eighths starting at $40 and ranging to $60; half ounces of smalls go for $130. Pre-rolls will cost $18 a pop, with packs and infused options priced at around $50.

Edibles and vape pens are a little steeper. A half-gram cartridge will run you about $55, with full grams at just under $100 and disposables at $45. Gummies, the only edibles currently available, go for $30 or $35, with different flavor options and a mix of cannabinoid ratios, including 1:1 THC:CBN, 1:1 THC:CBD, AND 1:1 THC:CBG.

“It’s a village,” says Burems of the new industry. “Everybody has their role. We all have to do our part, so we’re willing to serve as an opportunity space for our community and for legacy operators to enter the legal industry. That’s the work that we’re interested in doing.”

While the first official customer purchase by Ken W. didn’t take place until after 4 p.m., the line for Housing Works’ first adult-use sales started building around noon. A former resident of Houston, Texas, Ken moved to New York City earlier this year and told Leafly that he uses cannabis for his anxiety. Ken was smoking a bowl of Green Crack to pass the time in line, and marked the occasion by picking up an eighth of Gorilla Glue, New York’s most popular strain of 2022, per Leafly data.

While no one chose to camp overnight to be ahead of the game, the line at Housing Works was curling around the block by 3 p.m., with an eclectic mix of eager customers. Some cannabis culture legends, including Fab 5 Freddy and Shiest Bubz also made appearances.

Queens native John H, 24, hopped off the couch while watching Price is Right after a newsflash about the Housing Works opening ran during a commercial break. “I was like, ‘Oh shit, I should come out,’” John told Leafly as the line creeped toward the store’s entrance.

“That was a really intense experience,” Ken W., told Leafly before taking off with his historic haul. He fought through the chaos of cameras and returned to Broadway another face in a sea of millions. They have no idea they’re walking past the weed capital of the world’s first legal stoner. And as long as he has his Gorilla Glue, we have a feeling Ken is just fine with that. 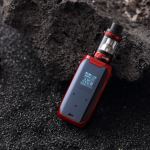 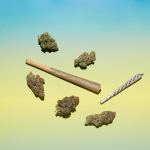