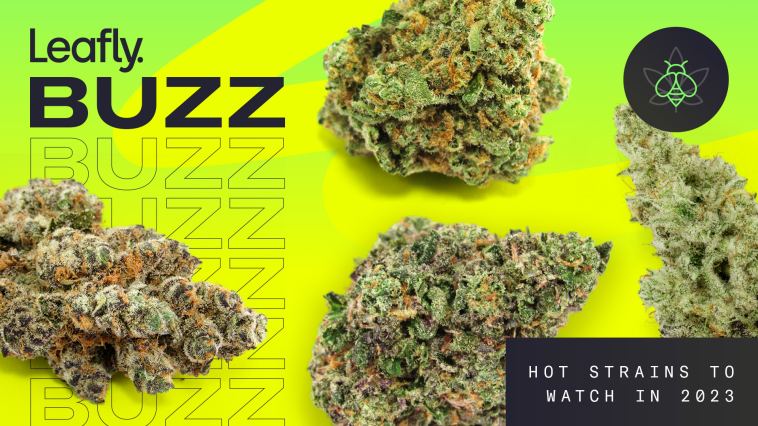 
Listen up, bong-loaders and blunt-rollers of North America: 2023 in cannabis flower promises to be a banger.

How do we know? We pore over US search and menu data from over 6,000 strains and 4,000 stores, and annual award-winners lists. We crawled contests and expos like The Emerald Cup Harvest Ball, and we interviewed breeders, growers, buyers, and smokers. And of course, we tried hundreds of strains to complete this definitive cheat sheet to the heat on the street. Let’s tuck into Leafly Buzz for January 2023.

Jump to trending strain of ’23

Explore smoking hot crosses of Sunset Sherbert and OZ Kush (Zkittlez x OG Kush) this year to encounter unforgettable tastes and versatile hybrid effects that work day or night. That means finding some world-class Zoap from Deo Farms, and checking out the “RS” line from Wizard Trees—RS#11, and RS#54. The pivotal parent here: Dying Breed Seeds’ strain OZ Kush. So re-visit OGZ and its aliases OGZ and ZOG. Oakland, CA breeder-grower Deo Farms only works in small, perfect batches. That means eighth-ounce bags of authentic Zoap could easily fetch $80-$85 when diverted into the global market for exotics, like the clubs of Bangkok, and Barcelona this year. Commercial US pot farmers will grow metric tons of the RS line and OZK for dispensary shoppers. Enjoy Zoap with a fellow cannasseur in a squeaky clean bubbler, or a ball out with a big cannon of it.

We don’t make the rules: In 2023, weed’s gotta look purple and smell like gas, or blunt smokers won’t puff, puff, pass. That means more of the Runtz variety Lemon Cherry Gelato, and the first crosses of it. The LA brand Backpack Boyz drummed up international business for ‘LCG’ in ’22, and that momentum still builds in the Eastern US and globally. LCG’s got the commercial stats to go to the top. It grows, dries, and stores well. The lemon, cherry, and creamy berry dessert smell and taste consistently deliver what the masses crave. Lemon Cherry Gelato works day or night for relaxing, indica hybrid effects.

Leafly Strain of the Year 2022 Jealousy rides a rocket into the stratosphere in 2023, even as it deploys new Jealousy hybrids and offspring. Seed Junky Genetics’ cross and selection of Sherb bx1 to breeder Jigga’s authentic Gelato #41 re-set the template for Gelatos in the 2020s. We’re all benefiting from this new level of look, smell, taste, and effect. Reviewers say Jealousy leaves them giggly, talkative, and relaxed—perfect for a night out with friends. See also: Banana Cream Jealousy, London Jelly, The Glove, Purple Octane, and Pacman.

The hype cycle has just begun for Goofiez—a new Compound Genetics cross of Jokerz and Apples and Bananas. Leafly already made Jokerz (Runtz x Jet Fuel Gelato) a Leafly Buzz strain to watch in 2022, and a runner-up to Leafly Strain of the Year. Now, Jokerz marries into the power of the Cookies strain Apples and Bananas. Goofiez has big, beautiful nugs with thick, tropical taffy smells and tastes; like a handful of Hi-Chew flavors. The Blue Power genes from the Apples and Bananas keep Goofiez’s THC scores and effect super-high.

Look out for and buy up work from Raw Genetics’ Zlushiez line (Zkittlez x Strawberry Fritter). The latest and juiciest? Grapefruit Zlushiez (Grapefruit Runtz x Zlushiez). Our test jar from California’s Ember Valley had the sweet, strawberry, citrus, and berry of a red and blue slushie, just with way more syrupy body, and a solid hybrid afternoon and evening effect. Hit Grapefruit Zlushiez before a movie or a gaming sesh for an even better time. See also: Unicorn Poop.

Oreoz had a banner year thanks to its icy, dramatic look and cookies-and-cream-like smell and taste. But not every grower could coax the sweet, chocolate cookie smell from Oreoz. A lot of it smelled like cardboard. In 2023, Cannarado’s Carbon Fiber (which also uses a Cookies and Cream parent) smells and hits as good as it looks. The California cloners at Phinest sell trays and trays of Carbon Fiber cuttings, which help build the wave. It’s one of the best gassy, dank GSC-type strains this year, and it also goes great with a couch and the end of the day, leaving reviewers talkative, aroused, and soaring.

Gary Payton (The Y x Snowman) has won over America with its all-star cookie family smell and powerful indica hybrid effects that wrap around you like a glove. The multi-state brand Cookies will pump out tons of Gary Payton coast to coast this year, and it’s a staple strain in the making. While that happens, the Gary Payton family expands with several hit crosses like Blackberry Gary. Simultaneously—we’re trying everything else coming off the family line of The Y; like Cereal A La Mode. Smoke some Gary Payton and kick back with a playoff game, and plenty of snacks to get giggly, chatty, and chill. High-tolerance types can burn one and shoot mad hoops like the San Francisco breeder Kenny Dumetz, founder of Powerzzzup Genetics.

Pink Certz (Grape Gas crossed to The Menthol) comes to hundreds and hundreds of more stores in 2023. The Certz brand team in New York pushes out the Pink Certz back East in ’23, after the strain dominated California cannabis competitions in 2022. Compound Genetics’ core creator Chris Lynch has moved on to new project Cipher Genetics, but his Compound creations, including Pink Certz, should keep building for years. The Menthol line of ‘mint’ flavored cannabis family provides a sweet, herby, cool mint smell and flavor without actual menthol. The smell comes from cannabis’ aroma molecules, called terpenes, some of which we understand, but many we don’t. Pink Certz left our reviewers focused and energetic yet relaxed—great for blasting through busy work. See also: Khalifa Mints, and Gush Mints.

We have to include an OG Kush on every annual forecast. America loves its ‘gas’-smelling strains, and the lemon-pine-fuel of OG Kush never goes out of style. It’s been around for about a decade, but we’re seeing a variant of OG Kush called OG#18 add stores and sales every month for at least a year now. Someone likely hit the jackpot on OG Kush genes and started a new OG wave that’s giving people what they crave in the strain. OG’s don’t grow super-great, but their terpenes survive the abuse of drying and storage to deliver accurate, citrusy, piney gasoline to the smoker. Cypress Hill’s B-Real said he smokes the hybrid indica for breakfast. The rest of us mortals pair an OG with happy hour, appetizers, dessert, or the bedroom. See also: Legend OG.

Who wants gas? I mean, like, ‘Tear into your nostrils and abuse them a bit?’ MAC1 creator Capulator, and Jealousy creator Seed Junky Genetics unite their most influential strains for Cap Junky—Alien Cookies x Animal Mints. The seeds sold out quickly, and now we’re seeing it grown by LA Made in LA, and along the West Coast. Few strains can match the sleet of trichomes, pungence, and heart-pounding effects of this high-THC, high-terpene varietal. Buckle up and enjoy Cap Junky with a couch and a wall to stare at—you’re going on an inward journey. One-quarter of early reviewers used it to manage their bipolar disorder. See also: Animal Face.

Citrusy, friendly Tangie and family have lots of fans as well as critics who want stronger effects from it. In 2023, look out for Super Boof, a Tangie, GSC, Black Cherry Punch project indebted to the so-called Mountain Trop (“Mtn. Trop”) selection of Tropicanna Cookies. It’s Tangie but with added cream and funk, and indica hybrid body effects from the GSC line. Super Boof’s also massive and pretty like Black Cherry Punch, with an ironic name that’s fun to say. The California breeder Blockhead went from virtual anonymity to having his work in hundreds of stores coast to coast. Tangies remain versatile—you can work on them, do yoga, hike, handle chores, whatever. Blast some Tame Impala and a bowl of Super Boof—you’ll feel like a brand new person. See also: Trop Cherry, Terple.

The savory, stanky, strong, and wrong GMO Cookies line has become an American mainstay. We wanted to shout out a rising star in the GMO constellation—First Class Funk. The Funk debuted several years back. Grower and smoker-tested and approved—it’s earned its spot on over 1,500 store menus nationwide. Compound Genetics added the bling, gas, and grower-friendliness of Jet Fuel Gelato to GMO—resulting in a Cup-winner and crowd-pleaser. First Class Funk reviews score high for soaring euphoria and party vibes. See also: GMO Rootbeer, and Gaschata.

The top of the sales charts for sativa lovers plays like classic rock radio: lots of decades-old gold like Super Lemon Haze, and Pineapple Express. Few new sativas break through to the main stage to play alongside the Gelatos and Zs hogging the limelight. One sativa that holds up to modern standards for size, bling, terps, and power—Pineapple Fruz from Seed Junky Genetics in LA. They grow it flawlessly in Northridge, CA at their “Farmacopeia” facility and they keep winning trophies with their closely held cross of Animal Mints bx1 x Zbx1. Seed Junky flowers sell in Michigan and beyond this year, so hopefully they’ll set the Fruz loose. Pineapple Fruz hits a little strong for breakfast, but a puff before the gym fights boredom—and it’s great at parties.

Original Glue, aka GG4, has a legion of fans nationwide clamoring for more from that line. However, the breeder Lone Watty died in 2020. The most active Glue offspring? The so-called White Truffle cut of Gorilla Butter (GG4 x Peanut butter Breath) from Michigan’s Fresh Coast Seed Co, and it’s spreading nationally into 2023. Can weed smell like an earthy, nutty, sweet, dank white truffle? You bet your snout it can. A whole Truffle line has sprouted up with Black Truffle and conflicts over the Truffle name. Reviewers got tingly, aroused, and relaxed on White Truffle—great for your favorite hobbies. Check it out for yourself and leave us a review on how White Truffle hits in your town.

And that’s a baker’s dozen banger strains (plus a bonus) set to sell out, take Cannabis Cups, and earn millions of fans for 2023. Many more flavors deserve equal space, but we gotta hold our fire for next time. Make sure to sign up for Leafly Newsletters and never miss our shining insights. Happy shopping, smoking, and growing in 2023!

Oft-copied, never co-opted—Leafly Buzz is the popular, monthly strain review roundup from Leafly News. We report independently on the connoisseur cannabis conversation, focusing on strain and branded flower of the US west. Reporting includes:

Read back issues of Leafly Buzz 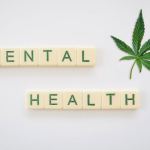 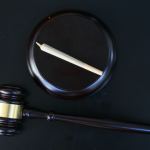