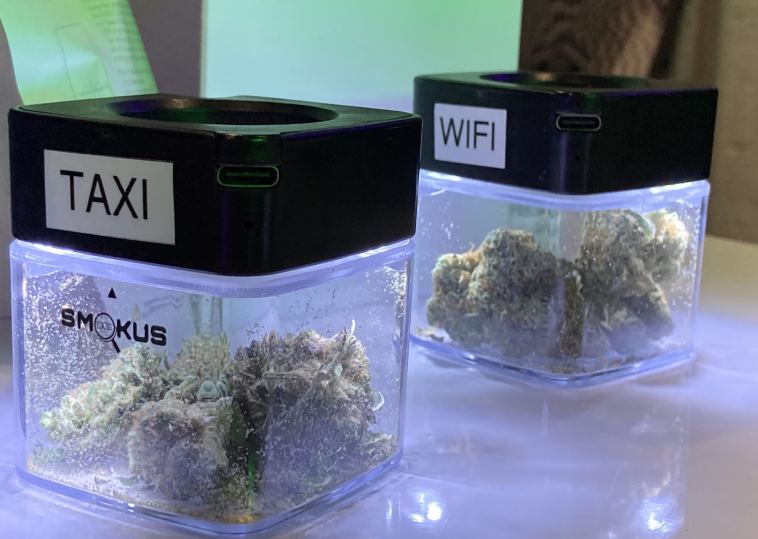 From Dirty Taxi to Coochie Runtz, New York City is packed with exotic and homegrown strains—if you know where to look.

Although New York City’s first licensed recreational cannabis shops won’t open until this fall, you’d be forgiven for assuming the industry is already up and running.

From Manhattan’s Lower East Side and Washington Square Park to Brooklyn, Queens, and beyond, New York City is bursting with weed retailers. Some of them stand proudly in the open and public-facing, and utilize a gifting model (similar to Washington DC’s market) in which cannabis gets thrown in for free with the purchase of a piece of art or symbolic item. Other businesses remain underground, members-only, and elusive.

Most of these stores aspire to get a state license once they become available. And lots of them sell top-shelf weed, straight outta California.

Thanks to New York City’s uniquely lax public consumption laws, you don’t have to go far to notice that the market is exploding: You can smell it everywhere.

One crisp and blustery day this April, I toured a couple of these shops—along with Leafly’s East Coast editor, Calvin Stovall—to learn which strains are hot, where to easily find quality weed, and the thrilling benefits of heading underground.

Find legal weed near you on Leafly

NFT’s with a side of weed

Take a spin through the Lower East Side and you can’t throw a rock without hitting a pot shop (or infused pizzeria). While Empire Cannabis Clubs, on Allen Street, is the most brazen—with a huge pot leaf sign hanging out front—a handful of other stores flourish quietly on side streets.

SLS—which additionally operates a similar store in DC, and a hemp cannabinoid retail shop in Miami—nonetheless makes little effort to disguise its wares. Pass through a glass door, present your ID to a bouncer, and you’ll find yourself in a cheery, bright space. Behind a counter, video screens display digital art—NFTs—that you can purchase.

What do you know? That NFT comes with free weed! SLS provides a menu of “content packs” including branded sativa and indica flower eights, edibles, carts, and more. You can check out the menu online, too. Not cheap by any means, the prices are still comparable to other stores and delivery services in NYC.

The store opened last November. “At first, people had no idea what to think” about the NFT gifting model, the manager, Peter, told Leafly.

But six months in, they’ve caught on. Peter told us that flower remains the shop’s top seller. The hottest strains? Cheetah Piss and Gushers. Both include the loud, sweet Gelato in their lineage.

I left with an infused kief-coated pre-roll and a small jar of the beloved Gushers. The latter proved to be perfectly cured, terpy, potent, and decked out with stellar, frosty buds. I’ve bought solid weed from delivery services in NYC before, and this felt comparable to some of the best.

New York opened the door to gifting, but now wants to close it

The bill makes it legal for adults to “transfer” cannabis up to three ounces of cannabis to each other, as long as “no compensation” gets exchanged. In response, many aspiring entrepreneurs quickly launched “gifting” dispensaries, like the one at Street Lawyer Services.

But then, this February, the state’s Office of Cannabis Management (OCM) sent cease-and-desist letters to over 50 of these “gifting” shops. Ignore the cease-and-desist, the letter said, and you definitely won’t get a license.

To stay in the state’s good graces, and to get out of the limelight, many underground shops that did not receive letters have largely stopped doing press, and their Instagram accounts have been made private.

But it could still be a long road ahead for many of them to go fully legal. In March, New York announced it will allocate the first 100 retail licenses to entrepreneurs impacted by the War on Drugs. Unless these current shops qualify as such, one aspiring license holder told me, they may wait a couple of years to even apply.

To learn more about the hush-hush side of the industry, Calvin and I visited a combined dispensary and members-only lounge in Manhattan that has gone to great lengths to remain undetected.

The business relies solely on word-of-mouth to attract new customers. It does not have a public address, and, even once you’re inside the building, locating the shop is difficult.

But once you make it past a legitimate fake wall, you will find yourself in an oasis for cannabis connoisseurs: Displays of branded pre-packaged eighths stand on shelves like art pieces, while a curated selection of vape carts and edibles sits on the counter.

Just like at Street Lawyer Services, most of the weed comes from California.

“People trust the regulated market” in California, the shop manager explained. “It’s the terroir of cannabis.”

The shop does carry a few New York-grown strains, however. The manager highlighted the funky Dirty Taxi, Wifi OG, and Pancake.

“There are growers here that have been growing forever,” he said, but “people don’t necessarily associate New York with good quality cannabis.”

Some of the packaging made clear these New Yorker growers want to emulate their West Coast peers. The plastic tube for one New York-grown pre-roll, for instance, included the iconic California warning label, but the “CA” had been tweaked to read “NY.”

More Gelato strains, and a ride in a Dirty Taxi

Just like at Street Lawyer Services, sweet, fruity strains were hot at this shop. Gushers were sold out. The manger noted that Rainbow Sherbert #11 (aka RS11) sold well, too.

I bought a Black Cherry Gelato pre-roll: Pungent and earthy, it delivered a top-notch and airy high, and smoked extremely smooth.

Calvin opted for the diesel-y and uplifting Dirty Taxi. “It smells like a funky ride in the back of a Queens cab, but delivers an exquisite high worthy of a five-star Uber ride,” he quipped.

He also grabbed an eighth of Jealousy. We headed to the lounge past the shop. A gaggle of skater bros hit high-end bongs and giggled loudly, while at a separate table, Calvin rolled a fat Backwoods.

Fire up at will, commander!

Giddy and impressed, we left the shop and ventured back out into the noisy city, with the Jealousy blunt in hand.

While the burgeoning industry is thrilling to behold, the ability to consume in public is even more surreal. Unsurprisingly, many New Yorkers find it incredibly annoying…and that includes many fans of the herb, and proponents of legalization, too.

Calvin lit up the Jealousy blunt on the street. He confirmed it was “sweet, thick, powdery and pungent,” and noted it was quite arousing as well. (In that moment, however, he seemed primarily excited by a classic New York slice of pizza.)

Holding a smoking blunt on the street, our pockets stuffed with top-quality weed, I felt the momentum of the moment. New York will soon become a huge cannabis market, but in this strange purgatory period, you could feel the promise of its greatness, too. 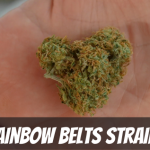 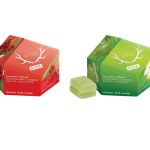