With all the tech-savvy portable vaporizers on the market, it’s easy to forget that a mere ten years ago, a lot of us were passing around Volcano bags, blowing vapor rings from V-Towers, and generally getting high af off desktop vaporizers. While this idea now seems nostalgic at best, and antiquated at worst, there’s a lot to be said for those pricey, high quality flower vaporizers, as well as the brands who make them.

It seems that in the transition from big expensive vapes to small portable vaporizers and vape pens, we’ve lost a lot of product quality, which in turn has soured many weed-users on the concept of vaporizing weed altogether. Even as a cannabis journalist, deep down I was one of those soured, combustion only stoners just days prior to writing this article.

The Air II, the first portable flower vaporizer from industry vets Arizer, re-opened my mind to the benefits of the intake method, as well as the perks of having a high-quality flower vaporizer in the mix. Clearly (a follow up to) the first portable device from a brand known for epic desktop setups, it’s a genre-bending product in that it’s both a portable and an at home vaporizer. Neither of which I knew how badly I needed.

Whether you’re in the market for a new vape, or just curious as to what all the buzz is about, here’s our take on the Arizer Air II.

What is the Arizer Air II?

The Arizer Air II is a portable convection vaporizer from the brand Arizer, well respected industry vets known for their no nonsense, high quality products. While Arizer initially rose to notoriety over 12 years ago for their desktop setups like the V-Tower and Extreme, they evolved with the times, and now have five portable vaporizers in their roster. The Air II is a follow up to the popular Air, which when it was released in 2011, was the brand’s first portable vaporizer.

Blurring the line between a high end, at-home vaporizer and a portable vape for on-the-go use, the Air II uses convection heating technology (using a ceramic heating element) to produce unmatched flavor. But just because this is fully a portable vaporizer, doesn’t mean it’s the type of vape you would want to sneak into a music festival, for example. Due to it’s design, which is simple but definitely prone to breaking, it seems more portable in the way that you would bring it from your living room to your bedroom, or maybe keep in your car.

While there are only two moving parts (the vape itself and a glass tube you preload with ground flower), the design of the Air II lends itself more to a sedentary session because the glass tube sits on top of the vaporizer itself, which is thin and could easily topple over. Though the tube fits snugly, it doesn’t fully lock into place, making the device particularly prone to vibe-shattering accidents.

What Can You Vape with the Air II?

The Air II  is only compatible with ground flower.

How do you use the Air II?

Now that we’ve been over the basics, here’s how you use the Air II.

The Air II comes with a swappable 18650 battery that can be charged while inside the Air II via USB, or outside of it with an 18650 compatible charger. This interchangeable batteries allows you to pre-charge batteries if you’re going camping, or doing something that doesn’t include electricity. A single charge can last for up to 90 minutes of continuous use, and the device takes about 3 hours to charge fully.

To charge the battery within the Air II, simply plug in the USB cable and adapter. The Air II’s screen will display the battery percentage, letting you know when it is fully charged. It is not necessary to fully charge the Air II upon first use, and the device can also be used while charging.

The control panel of the Air II consists of an OLED display and three buttons: Menu (M), Plus (+), and Minus (-). With these, you can control every aspect of the device, using M to toggle through the menu, and plus and minus to set things like temperature settings, brightness display, shut off timers and more. I turned the device on before reading the manual. The set up is so simple, it’s pretty much self explanatory.

How to Clean the Air II

Essentially maintenance free, the Air II is extremely easy to clean. Simply soak the glass parts in isopropyl alcohol for a couple of hours, then rise with hot water. Make sure they are fully dry before re-inserting them into the top of the device .

With it’s simple design and high quality vapor production, The Air II is a great vaporizer for novice and seasoned users alike. Whether it’s the people who want to get into using cannabis but don’t want to smoke for medical reasons, or heavy smokers who either want a break from combustion or to conserve (and truly taste!) their weed, the Air II fills a void in that its a desktop-quality vaporizer in the form of a casual, portable vape, even if it is a little fragile.

Just because a hot new vaporizer has enough bells and whistles to link with a bluetooth speaker across the street doesn’t make it a good product when it comes time to get high. The Arizer Air has stood the test of time, and it’s successor, the Air II, will surely carry the flame for years to come.

Everything you need to know about the Arizer Air II originally appeared on Weedmaps.com 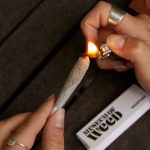